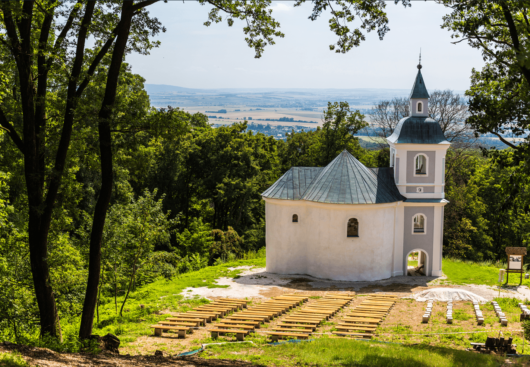 Archaeological research shows that the first inhabitants of this region – wandering families of Slavic tribes – settled on the upper reaches of the Blatnica, Radošina, Hlavinka and other streams. The settlement related to the village of Nitrianska Blatnica is archaeologically documented in the locality referred to as Ďurko (Loco Durco). The area was once an important road connecting the Principality of Nitra with Považie and further with Moravia. There was a turn off the road as far as Marhát and it crossed a meadow called the Desert. 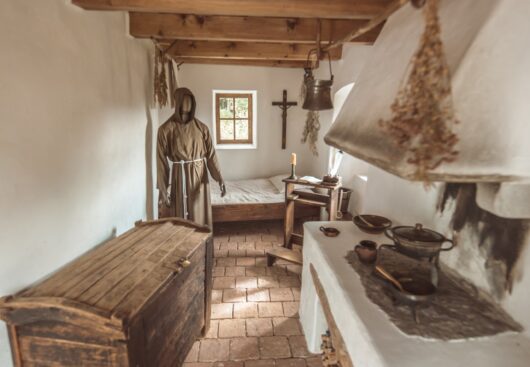 A monument of the Great Moravian period
The Rotunda of St. George, a national cultural monument, is located in the woods north of the village. The Rotunda is 5 km far from the village. The age of the rotunda has been determined to be between 790 and 870.

The Rotunda is the oldest standing sacral building in Slovakia and Central Europe. The rotunda had its twin in nearby Ducovo /Kostolec/. Around both of them were palisade courts belonging to the local ruling class. After the collapse of the settlement in the 13th century, the rotunda turned into a ruin. The ruins were repaired and revitalized 300 years later, in 1530. At the end of the 16th century a hermitage was added to the rotunda. The tradition of pilgrimages to St. George’s, which take place every April 24, is still alive here.

During archaeological research, about 150 skeletal graves were found near the rotunda, some with silver jewellery finds. Many artefacts attest to the mining and processing of iron ore. Between 2009 and 2016, a comprehensive restoration of the rotunda and hermitage was carried out, which yielded significant new discoveries – an original window opening in the south-west wall and fragments of wall paintings.

Tip for an experience

The village of Nitrianska Blatnica is a great starting point for hikers. A green trail leads from the cultural centre in the village towards the mountains.

More information and other tips for experiences

Manage cookie consent
To provide the best experience, we use technologies such as cookies to store and/or access device information. Consenting to these technologies will allow us to process data such as browsing behavior or unique IDs on this site. Disagreeing or withdrawing consent may adversely affect certain features and functions.
Manage options Manage services Manage vendors Read more about these purposes
Show preferences