Komárno, a town at the confluence of the Váh and the Danube, is the centre of the Danube region. It is one of the oldest permanently inhabited places in Slovakia, which is why the town boasts a rich history. Across the city of Komárno and its surroundings 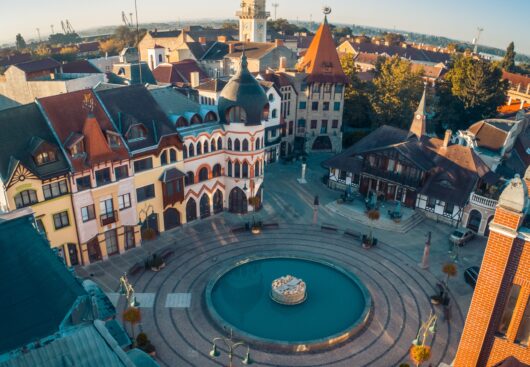 The surroundings of today’s town were inhabited already in the Bronze Age, but more significant traces were left here by the Celts and after them by the Romans in the form of the Roman military camp in Iža, which was part of the Limes Romanus. Later the town was settled by the Avars and then by the Slavs. The first city privileges were granted to Komárno by Belo IV in 1265, which led to the development of the city. Turkish expansion contributed to its further development. Komárno became a border fortress of the empire and the construction of a military fortress began, which became the basis of the city’s defence system. After the expulsion of the Turks, Komárno became an important city in Hungary thanks to its location at the crossroads of water and land routes. In 1745 Maria Theresa granted Komárno the title and rights of a free royal town. The construction of palaces, monasteries and churches began. However, the construction was halted by a strong earthquake in 1763 and two decades later, in 1783, another earthquake struck the city. Despite the damage, the town retained its status as an important centre. Another blow to the city was the great fire of the fortress and the destruction of much of the city during the revolutionary years of 1848/49.

Today, this city of almost 37,000 inhabitants lives a rich cultural and social life. It offers visitors a glimpse into history through visits to historical monuments, the dead arm of the Danube is an attraction for water sports enthusiasts and the year-round thermal swimming pool provides relaxation in the thermal water. 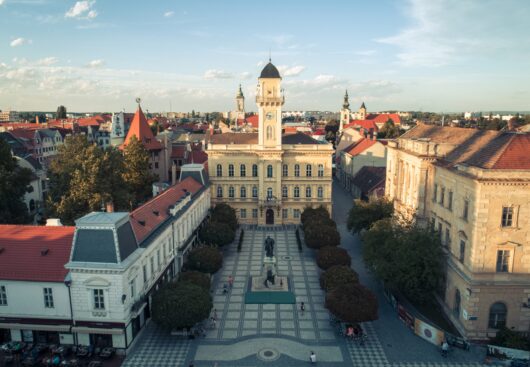 You can start your sightseeing tour of Komárno in the centre of the city at the Square of Gen. J. Klapka. Today’s square was created on the site of a pond, which was the remnant of a moat protecting the walls of the medieval town. A market square was built on the site of the dried-up pond. At the end of the 17th century, a house used for meetings of the town council stood on the north side of the market square. Today, a neo-Renaissance town hall stands on its site. This three-storey, two-tract, originally Baroque building on a rectangular plan, whose frontage is dominated by the town tower, has been rebuilt several times to its present form. Today it is also the seat of the municipal authority.

Another dominant feature of the square is the Zichy Palace from the end of the 17th century. For centuries, this historic building has played an important role in the history of the town. It has been used as a theatre, a dwelling house, a synagogue, a post office and a cellar. Today it houses the Danube Museum, whose exhibitions document the rich history of Komárno and its surroundings, the life and work of the city’s personalities. 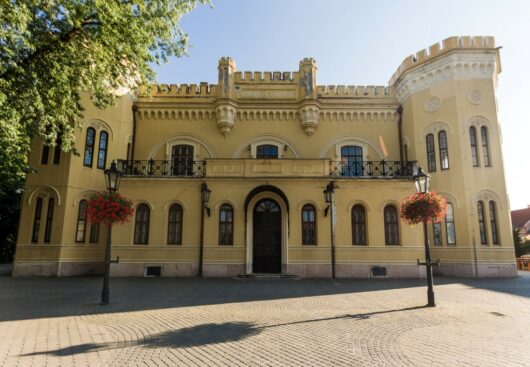 The Officers’ Pavilion, a two-storey four-wing building on an irregular plan with an inner courtyard, is also an unmissable building. The pavilion was part of the military buildings of the Komárno Fortress. It housed apartments for officers of the imperial and royal army. On the ground floor there was a large officers’ casino. On the front of the building you can see the inscription VIRIBUS UNITIS (in unity there is strength), which was the motto of Emperor Franz Joseph I. The premises of the Officers’ Pavilion are currently used by János Selye University and the Komárno Municipal Office. In the courtyard of the Pavilion there is an amphitheatre, which comes alive with concerts and events during the summer months.

When visiting Komárno, do not miss the Courtyard of Europe. This square is a unique piece of architecture by the architects of the Atelier Europa in Komárno. More than forty buildings, built on a one-to-one scale, represent the architecture and building styles typical of each region of Europe. The connection between the historic core of the city and the Courtyard of Europe is formed by the historic entrance gates, each bearing the name of a Hungarian monarch. Alongside the colourful buildings, you can admire the statues of Europe’s patrons or sit on the benches by the Millennium Fountain. 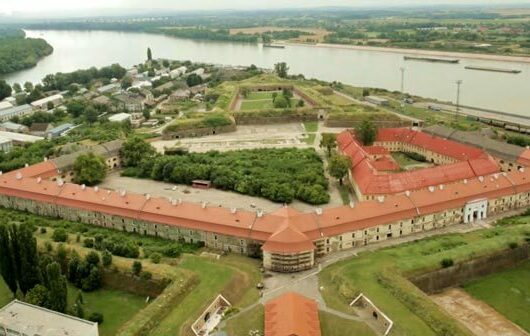 The biggest historical monument of the city is the national cultural monument “Fortress”. This unique fortification object is a system of bastions and fortifications on the territory of the town of Komárno and the opposite banks of the Danube and Váh rivers, which together with the central fortress form the most extensive fortress system in Central Europe.

The oldest part, the so-called Old Fortress, was built in the 16th century on the site of a medieval castle. In the 17th century it was extended by the so-called New Fortress. The fortress did not escape the strong earthquakes in the 18th century, which damaged it considerably and it lost its military character. However, the military campaigns of the French Emperor Napoleon I. contributed to the restoration and modernisation of the fortress, which made it the most extensive fortress system in Austria-Hungary, capable of accommodating up to 200,000 soldiers if necessary.

The fortress retained its military function even after the end of the Monarchy. Today it is the property of the city of Komárno. The gates of the Fortress are open to the general public throughout the year. Before visiting, we recommend reading the visiting regulations and inquiring about availability. 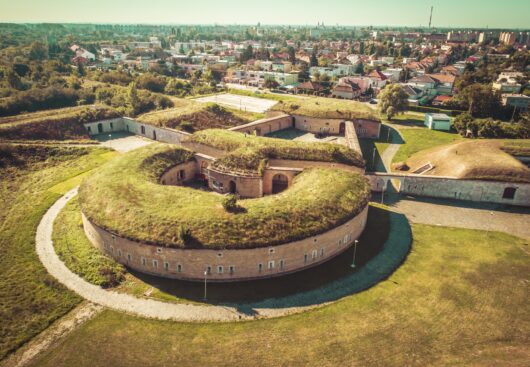 In the southern part of the bastion in the building of Bastion VI, which is an interesting fortification building from the 19th century, the museum in 1993 established a lapidarium – an exposition in which the visitor can find Roman stone carving monuments, tomb and altar stones, sarcophagi and other relics dating from the Roman frontier fortifications of Brigetio and Kelemantia. The exhibition is open to the public only during the months of July-August. From September to June, the museum is only open for pre-announced group visits. 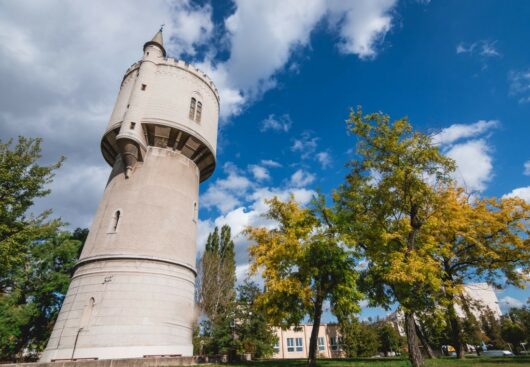 Komárno’s waterworks is one of the oldest after Bratislava and Trenčín and its tower water tower is the oldest of its kind in western Slovakia. It originally covered the water needs of the entire city and the village of Új Szőny, which is now a municipal district of Komárom in Hungary. The plans were drawn up by the royal engineer Zarka Elemér in 1901 and the reservoir was put into operation in 1902. The tower, built in the Romanesque style, is 28 metres high and the total volume of the reservoir is 500 m³. It is no longer in use due to increased pressure conditions in the water pipes, but it is still maintained in a serviceable condition. The tower is considered a characteristic building of the town. 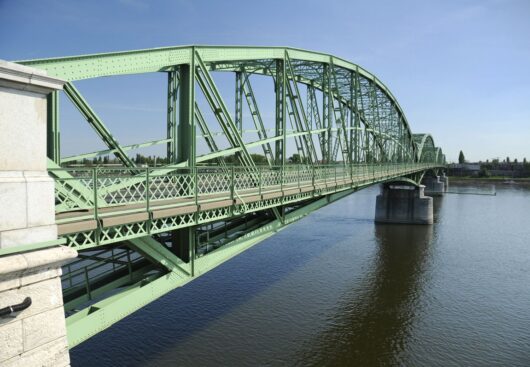 The first so-called ship bridge over the Danube was built in Komárno in 1586 and carried 79 ships. In 1892, this boat bridge was replaced by the fixed Elisabeth Bridge, which was named after the famous Empress Sissi. For more than 130 years, it has connected two towns – Slovak Komárno and Hungarian Komárom, which used to form one town and were only divided by the establishment of the first Czechoslovak Republic. Approximately in the middle of the bridge is the border line between Slovakia and Hungary. If you cross the bridge on foot, about halfway across the bridge you may have one foot in Hungary and one foot in Slovakia. 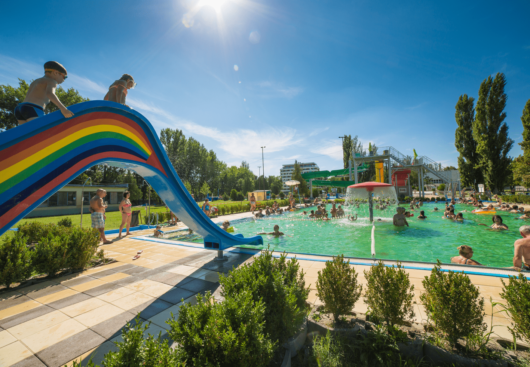 Relaxing in the thermal water

If you want to explore more of the Danube region, download the GUIDE@HAND mobile app Danube-Dunamente and discover the charm of this region. You can download the app on Google Play and in the IOS AppStore. More info here. 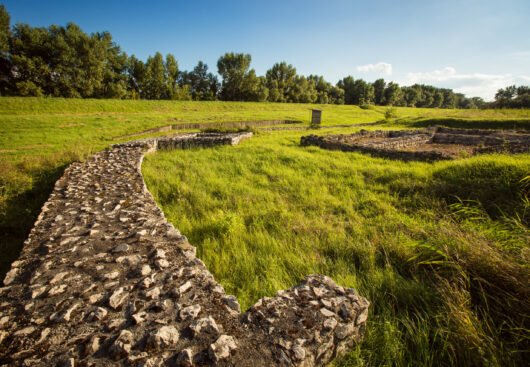 For lovers of Roman history, we definitely recommend a visit to the Roman military camp of Kelemantia near the village of Iža, 7 kilometres east of Komárno. The Romans, at the time of their greatest territorial expansion, came to the far north and crossed the Danube River. Evidence of their former presence can be seen in the military camp of Kelemantia, which was built during the reign of Emperor Marcus Aurelius. The camp was part of the Limes Romanus, a Roman 6 000 km long defensive border system. The border was protected by legionaries quartered in camps. The camp covered an area of more than 3 hectares and was surrounded by double ditches, earthen ramparts and a wooden defensive wall. Since 2021, the camp has been inscribed on the UNESCO World Heritage List.

The Kelemantia Roman and Ethnographic Museum is located in the village, with a Roman and ethnographic exhibition. The museum also includes an artisan workshop where you will be shown how the Romans lived and worked. 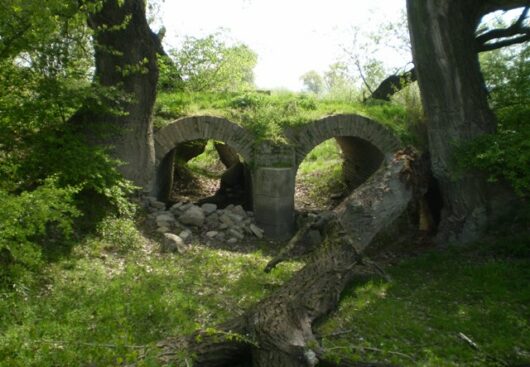 When visiting Iža, be sure not to miss the Turkish Bridge. This small double-arched bridge can be found on the banks of the Danube near the petrol station. It is said to date back to Turkish times, which is why the locals call it the “Turkish Bridge”.
If you get thirsty, be sure to try the fresh water from the artesian well located in the middle of the village towards Štúrovo. The water in this well comes from a depth of 220 m.

There are up to 3 churches in Iža – the Roman Catholic Church of St. Michael, the Evangelical Church and the Reformed Church

You can find everything about Komárno and its surroundings here
Manage cookie consent
To provide the best experience, we use technologies such as cookies to store and/or access device information. Consenting to these technologies will allow us to process data such as browsing behavior or unique IDs on this site. Disagreeing or withdrawing consent may adversely affect certain features and functions.
Manage options Manage services Manage vendors Read more about these purposes
Show preferences